The Scholars Forum and more
Total at 9:20 PM No comments:

Second hour: Long-time listeners know that I admire Dr. James Fetzer's work, agree with him on many but not all issues, but am not always impressed by the infamous "Fetzer school of tact and diplomacy." Still, I am even less impressed by his enemies, including some otherwise good people like Kevin Ryan and Anthony Lawson, who sometimes fall into mindless anti-Fetzer hysteria.
The latest anti-Fetzer hysteric is my AFR co-host Pete Santilli, a fanatical Judy Wood cultist who launched a completely unhinged attack on Fetzer last week. Pete's gripe: He claims that Fetzer is somehow covering up Judy Wood's efforts to attribute the 9/11 demolitions to mysterious "directed energy weapons." What a crock! The fact is that Jim Fetzer is virtually the only major figure in the 9/11 truth movement who ever gave Judy Wood a fair hearing. Before attacking Fetzer, Santilli should be targeting every other important member of the 9/11 truth movement, virtually none of whom has ever had much use for Judy Wood. 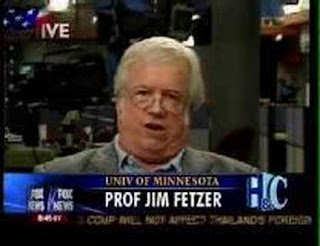 Judy Wood is obviously a paranoid "if you're not with me you're against me" personality, and her paranoid style has proved contagious; most of her supporters, including Santilli, are equally nutty. This paranoid style has alienated 90% of the truth movement, and 100% of people unfamiliar with 9/11 truth. But that doesn't mean Judy's wrong; she may well be correct in arguing that various anomalies surrounding the 9/11 demolitions suggest that some sort of ultra-high-energy device(s), perhaps mini-nukes or other "classified" weapons, were used. If so, the perps are undoubtedly happy that such a paranoid and divisive personality is "poisoning the well."